It is highly probable that the earliest speakers of this language originally lived around Ukraine and neighbouring regions in the Caucasus and Southern Russia, then spread to most of the rest of Europe and later down into India. The earliest possible end of Proto-Indo-European linguistic unity is believed to be around 3400 BCE.”

Some aspects of this migration theory have also been supported by DNA studies. Here is the one covering the area of Europe: 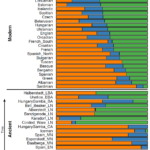 “Western and Eastern Europe came into contact ~4,500 years ago, as the Late Neolithic Corded Ware people from Germany traced ~3/4 of their ancestry to the Yamnaya, documenting a massive migration into the heartland of Europe from its eastern periphery. This steppe ancestry persisted in all sampled central Europeans until at least ~3,000 years ago, and is ubiquitous in present-day Europeans. These results provide support for the theory of a steppe origin of at least some of the Indo-European languages of Europe.”
https://www.biorxiv.org/content/early/2015/02/10/013433

Interesting. So the people that spoke a language which served as a foundation for basically all the European languages (and beyond) lived on the territories of modern day Ukraine and surrounding regions, at least according to migration theory. It is no wonder then that Slavic languages expanded and diversified to cover “over 50% of the territory of Europe.” [Wikipedia]

Let’s pull up a brief historical summary on Ukraine (prior to conversion to Christianity):

Neanderthal settlement in Ukraine is seen in the Molodova archaeological sites (43,000–45,000 BC) which include a mammoth bone dwelling. The territory is also considered to be the likely location for the human domestication of the horse.

Modern human settlement in Ukraine and its vicinity dates back to 32,000 BC, with evidence of the Gravettian culture [stone tools] in the Crimean Mountains.

By 4,500 BC, the Neolithic [farming] Cucuteni-Trypillian Culture flourished in a wide area that included parts of modern Ukraine including Trypillia and the entire Dnieper-Dniester region [the largest settlements in Neolithic Europe].

[The name Cucuteni-Trypillian comes from the names of modern day geographic locations of Cucuteni in Romania and Trypillia in Ukraine where the artifacts of this ancient civilization were first discovered.]

[A large part of Ukraine was also inhabited by Yamna culture and predecessor cultures collectively called Kurgan who are believed to have been the carriers of the initial Proto-Indo-European language. One theory for the demise of Trypillian culture is that it was overrun or absorbed by the expanding Yamnas. An alternative or additional theory is that primarily agrarian Trypillian culture demised due to climate change! This could have been the very factor that also motivated members of the neighboring Yamna culture to set-off in different directions in search for better conditions. Members of the Trypillain culture may have simply been forced to abandon their way of life and convert into a nomadic culture.]

Demise of Trypillian culture: In the 1990s and 2000s, another theory regarding the end of the Cucuteni-Trypillian culture emerged based on climatic change that took place at the end of their culture’s existence that is known as the Blytt–Sernander Sub-Boreal phase. Beginning around 3200 BC, the earth’s climate became colder and drier than it had ever been since the end of the last Ice age, resulting in the worst drought in the history of Europe since the beginning of agriculture. [Anthony, David W. (2007). The Horse, the Wheel, and Language: How Bronze Age Riders from the Eurasian Steppes Shaped the Modern World. Princeton, NJ: Princeton University Press. ISBN 978-0-691-05887-0.] The Cucuteni-Trypillian culture relied primarily on farming, which would have collapsed under these climatic conditions… — end of citation — 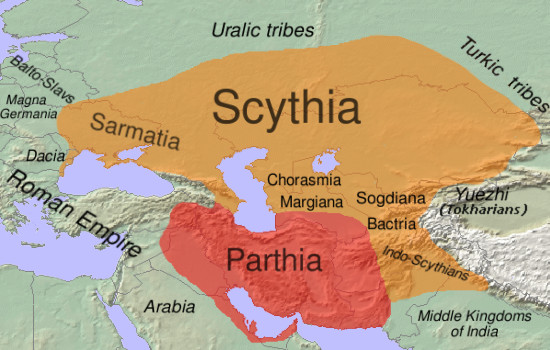 During the Iron Age [around 1200 BC to 600 BC], the land was inhabited by Cimmerians, Scythians, and Sarmatians.

Between 700 BC and 200 BC it was part of the Scythian Kingdom, or Scythia [considered Iranian].

Beginning in the 6th century BC, colonies of Ancient Greece, Ancient Rome and the Byzantine Empire, such as Tyras, Olbia and Chersonesus, were founded on the northeastern shore of the Black Sea. These colonies thrived well into the 6th century AD.

The Goths [Germanic people] stayed in the area but came under the sway of the Huns from the 370s AD.

In the 7th century AD, the territory of eastern Ukraine was the centre of Old Great Bulgaria. At the end of the century, the majority of Bulgar tribes migrated in different directions, and the Khazars took over much of the land.

Kievan Rus’ was founded by the Rus’ people, who came from Scandinavia across Ladoga and settled in Kiev around 880 AD. Kievan Rus’ included the central, western and northern part of modern Ukraine, Belarus, far eastern strip of Poland and the western part of present-day Russia. According to the Primary Chronicle the Rus’ elite initially consisted of Varangians [Vikings] from Scandinavia.

During the 10th and 11th centuries, it became the largest and most powerful state in Europe. It laid the foundation for the national identity of Ukrainians and Russians. Kiev, the capital of modern Ukraine, became the most important city of the Rus’.

The Varangians later assimilated into the Slavic population and became part of the first Rus’ dynasty, the Rurik Dynasty. Kievan Rus’ was composed of several principalities ruled by the interrelated Rurikid knyazes (“princes”), who often fought each other for possession of Kiev.

The Golden Age of Kievan Rus’ began with the reign of Vladimir the Great (980–1015), who turned Rus’ toward Byzantine Christianity.

Ukraine indeed has quite a bit of history with a continuous development and clash of different cultures and civilizations, but what is also interesting is that Slavic languages have so much retained their “orthodoxy” that there can be found striking similarities in root words between Sanskrit [the language of Vedic texts] which dates to at least 1,500 BC and even modern day Russian (and other Slavic languages). Sanskrit is placed within the Indo-European language group.

Here is a blog – https://borissoff.wordpress.com – of an expert linguist with lists of identical or similar root words between Russian and Sanskrit as well as English and Sanskrit and some other comparisons. Here is another interesting article from an Indian source discussing similarities between Russian and Sanskrit while also trying to imply that southern tribes spread their culture up North which is contrary to the accepted theories of early migration patterns. This of course can be a subject of heated debates, but what is clear is that in ancient times there was plenty of exchange in culture between different regions of the world.

The Vedas are a collection of hymns and other religious texts composed in India between about 1500 and 1000 BCE. It includes elements such as liturgical material as well as mythological accounts, poems, prayers, and formulas considered to be sacred by the Vedic religion.

The origin of the Vedas can be traced back as far as 1500 BCE, when a large group of nomads called the Aryans, coming from central Asia, crossed the Hindu Kush Mountains, migrating into the Indian subcontinent. This was a large migration and used to be seen as an invasion. This invasion hypothesis, however, is not unanimously accepted by scholars today. All we know for certain, mainly through linguistic studies, is that the Aryan language gained ascendency over the local languages in the Indian sub-continent. The language of the Vedas is Sanskrit, an ancestor of most of the modern languages spoken today in South Asia.

Think about it. A structurally developed language with sophisticated writing system whose words share many commonalities with some modern Slavic languages already existed as early as 1500BCE – around the time when the writing system of Ancient Greek is also known to have come into existence [https://www.britannica.com/topic/Greek-language]:

Starting from a foreign script known as Linear A (used in Crete to record a native language known as Minoan), the Greeks devised, toward 1500 BCE at the latest, a syllabic script to record their own language. Known as Linear B, this script was deciphered in 1952 by the British architect Michael Ventris and the British classicist and linguist John Chadwick.

Perhaps the clearest general understanding of language development comes from this article scrutinizing the theorized existence of a Proto-Balto-Slavic language:

The first scholar to reject the Baltic and Slavic unity (and, thus, the assumed proto-language, Balto-Slavic) was the famous linguistic genius of France, Antoine Meillet. At the beginning of this century, Professor Meillet, in several of his epoch-making publications proclaimed the notion that the few apparent similarities between Baltic and Slavic are simply either mutual, or one-way, influences upon each other, and that other similarities are simply results of parallel but independent developments whose primary origins most probably go back to the very Proto-Indo-European itself.

b) Meillet understood one basic fact: since both groups — Baltic and Slavic — are quite conservative and archaic, they both have preserved, even until the present day, many a feature inherited directly from Proto-Indo-European, features which most of the other living Indo-European languages have lost. Let us mention in this connection a simple example.

When someone who is not a trained historical linguist sees that in Lithuanian the words “when” and “then” are kada and tada and that these same words are in Russian kokda and togda (pronounced: kagda, tagda), he usually jumps to a hasty, but perhaps understandable, conclusion: „Gee whiz, Lithuanian and Russian are very similar, and they sound alike.” But this person usually does not know that in Old Indie (Sanskrit) the very same words are also kada and tada! And one can find hundreds of similar examples.

Meillet was the first to point out that there never had been one common ancestor, “Proto-Balto-Slavic,” but that Baltic separately and Slavic in its turn, also separately, developed directly from Proto-Indo-European. The few similarities which Meillet believed could be found between Baltic and Slavic were to him either a) inherited (or preserved) from Proto-Indo-European or b) parallel, but separate developments.