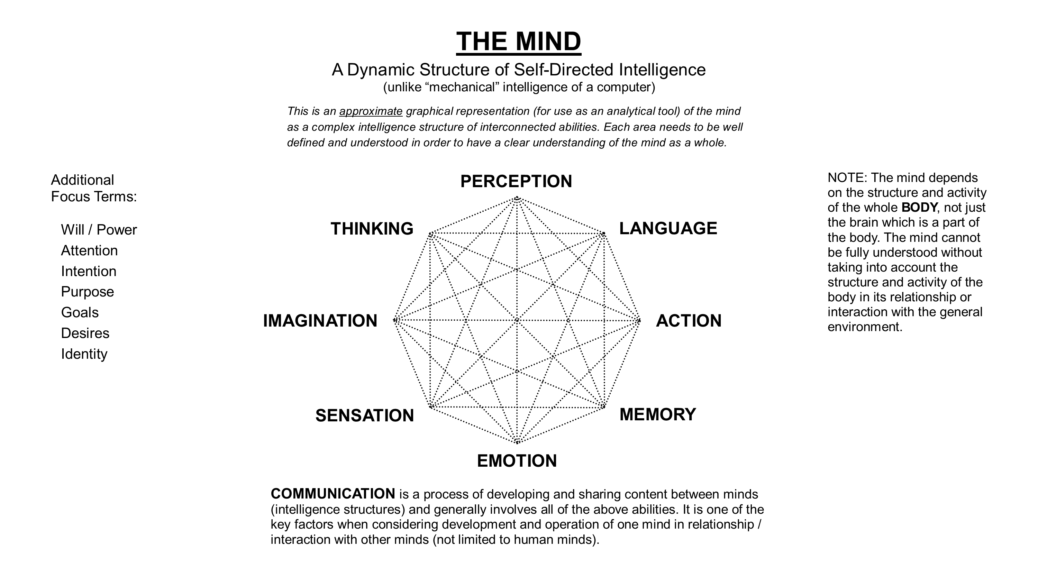 This page presents a list of key educational materials aimed to provide BASIC PRINCIPLES AND DEFINITIONS which serve as the basic framework for developing a more in depth understanding and methodology.

The information is placed on this page on a “work in progress” basis. 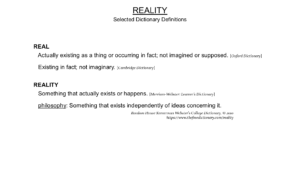 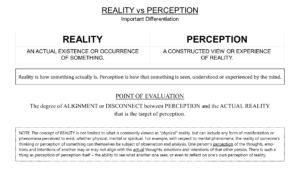 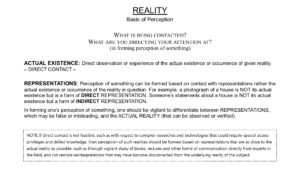 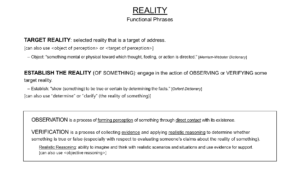 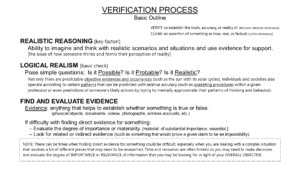 Reference video (for a basic description of neural network structure and its mechanics):

This is a slightly shortened clip (in order to isolate key concepts) of an original video provided by Harvard University: YouTube link 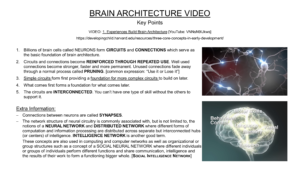 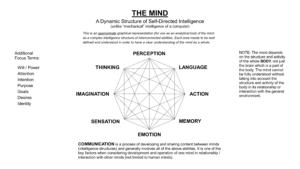 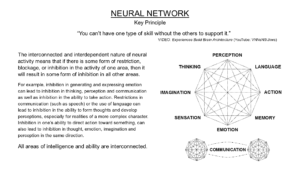 Reference videos (specific):
[Attention is focused on the first 4 minutes of the presentation.] 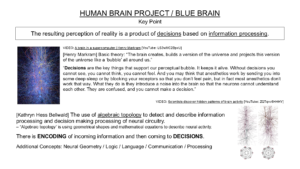 Key Concept:
COMPUTING PERCEPTION OF THE REALITY OF SOMETHING
(such as perception of one’s immediate environment).
[This is better understood when understanding how perception of reality is constructed by the mind – see the section on PERCEPTION.]

You can now read segment DIANETICS UPGRADED on page: Dianetics and Scientology Upgraded.

Reference video [attention is focused on the first 6 minutes of the video]: 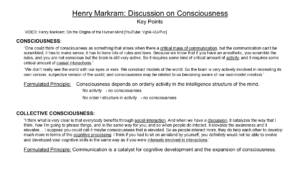 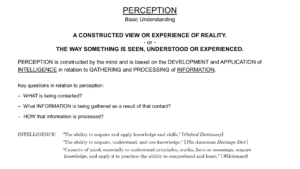 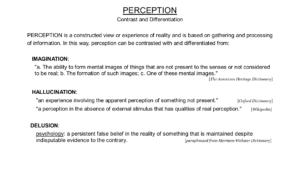 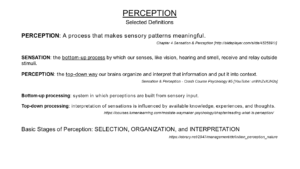 This webpage has some very useful terms related to the subject of perception:
https://ebrary.net/2947/management/definition_perception_nature [PDF backup]

Key video on the subject of SENSATION and PATTERN RECOGNITION.

Critical note on the above video:

In the video Anil uses the term “CONTROLLED HALLUCINATION” to describe the nature of perception, but it is a rather poor choice of words because “hallucination” is a word that is understood to mean false perception – perceiving something that is not there. Formal definition of the word hallucination: “an experience involving the apparent perception of something not present.” [Oxford Dictionary].

“Controlled hallucination” would be an appropriate term to describe a form of vivid, realistic imagination of something, but it is not suitable for the phenomenon of perception. “Controlled imagination” (of something in reality) would have been better, but in order to avoid any possible confusion, the word PICTURIZATION was selected to describe the phenomenon of translating sensory information into something that is “seen” by the mind. [See below slides for a more detailed explanation].

Also, the fact that we TRANSLATE and INTERPRET basic sensory information about some given reality does not mean that perception is like “hallucination.” TRANSLATION of one thing into another can be quite exact and result in a view that is even better than “raw” information.

The signals in the brain are not “noisy” and “ambiguous.” The brain is NOT “locked up inside the skull” since the brain is not some kind of separate entity with an identity of its own. The brain is an ORGAN that is part of a larger organism that is imbued with intelligence and sensory mechanisms all throughout. The brain definitely knows where the signals are coming from. It doesn’t just look at the signals that somehow end up inside of itself. It knows that it is capturing a signal of light from the eye or of sound from the ear. The brain knows what it is capturing and the processing and interpretation of that information is LOGICAL and PRECISE.  Sure, it may not be “exact” in computer sense, but it is exact for the purpose of constructing a WORKABLE MODEL OF REALITY.

In the example where two squares of the same shade of gray look different because there is a shadow that is cast on one of the squares, Anil cites an example of a logic that is used by the mind to process visual information: “So what’s happening here is that the brain is using its prior expectations built deeply into the circuits of the visual cortex that a cast shadow dims the appearance of a surface.”

Lastly, the word “prediction” may not exactly be appropriate to describe the process of logical translation of one thing into another to arrive at something that is seen by the mind. The mind definitely engages in predictions in constructing its view of a given reality, but predictions and expectations is an additional component in the general process which also includes logical translation and interpretation of signals. In other words, the concept of “predictions” is not something that describes the totality of the process but rather something that describes one of the factors in the general process.

The general process of perception can be basically seen as a combination of bottom-up and top-down processes.

See this video for a much more detailed explanation of what Anil described in general for the general public in the video above.
[Attention is focused on the material covered between 20:09 and 28:26 time marks.]

THE FORMULA OF PERCEPTION 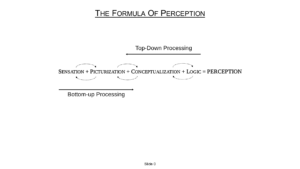 In order to develop FULL PERCEPTION of something – perception as a form of reflection of the actuality of some given reality in one’s consciousness – there must be an ability to somehow SENSE the reality in question, then to PICTURE exactly what one is sensing, to DEFINE it in more abstract terms [CONCEPTUALIZATION] and then develop an UNDERSTANDING [LOGIC] of its construction and/or the underlying principles behind its operation or functioning.

You can now read SCIENTOLOGY UPGRADED on page: Dianetics and Scientology Upgraded.

Language is deeply integrated into the neural network of the mind  (the structure of human consciousness): 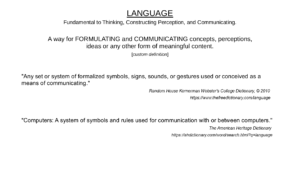 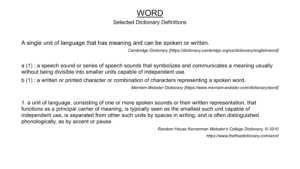 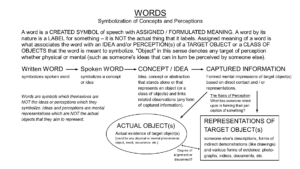 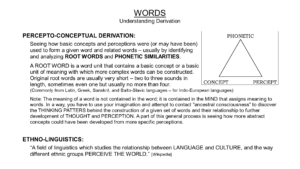 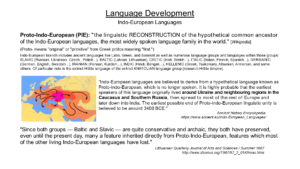 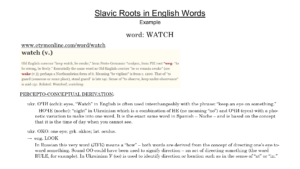 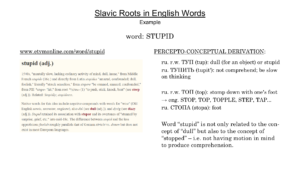 Here is a very useful blog – https://borissoff.wordpress.com – of a professor in linguistics with lists of identical or similar root words between Russian and Sanskrit as well as English and Sanskrit and some other comparisons. Russian-Sanskrit VERBS & NOUNS. English-Sanskrit similar words.

Also see page Language, Thought and Civilization for references to much more detailed exploration into the relationship between language, thought and civilization development. 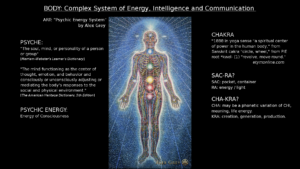 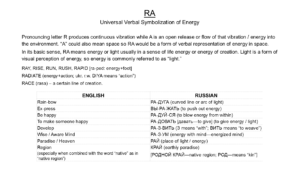 Much more can be said about this section, especially in pointing out the fact that location of the mind is not just limited to the head – the entire body is an intelligence system. There is a system of minds that are interconnected into one network. Each Chakra area can be associated with a mind as a processing center of information and some form of decision making.

The entire body is also a system of interconnected sensory organs – a system of sensory information collection and processing. These different centers can enter into conflict with each other: such as something that you THINK is the case may be in conflict with something that you FEEL to be the case. You think one thing in your head, but the “gut” is telling you something else. That’s because there is a “mind” in the gut that processes different kinds of sensory information – such as someone’s intention for example, apart from what someone may be saying which may be received and processed by a different part of the overall network of the mind.

The entire body is a system of sensory organs and a system of minds that process different kinds of information and make decisions (as neural networks). Below that you also have cellular intelligence structures and colonies of microorganisms. See more on page: UNDERSTANDING THE MIND.

Apart from perceiving energies of the “physical universe” in the form of light and sound waves, heat… there is also perception of PSYCHIC ENERGIES of other people (and other forms of life) such as perceiving someone’s thoughts, emotions, intentions, etc. The human mind is not limited to just processing the energies of the physical universe. With advances in the perception-ability of psychic energies, tele-pathic and tele-visionary communication can be developed. That is, for example, instead of having to communicate something through verbal language, someone can simply communicate a feeling or a vision into another mind directly.

Also, the ability for visual picturization does not have to be limited to sensory signals coming from the eyes. With so much intelligence and neural networks pervading throughout the entire body, there is really no reason why a human being should be able to see into various areas of one’s body as a specialized, and perhaps much more intelligent form of “x-ray” vision. In fact, when someone is looking into their memories, they are already redirecting their picturization ability toward some other source of sensory information, not coming from the external environment. 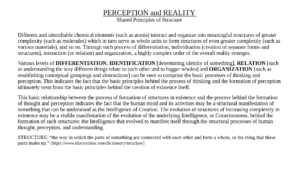 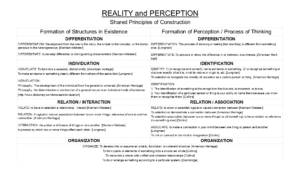 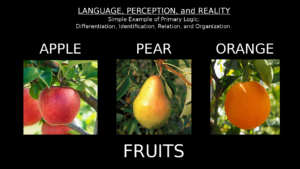 An appropriate video for the concept.