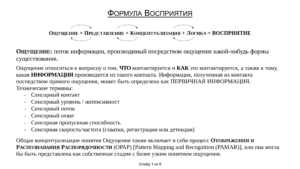 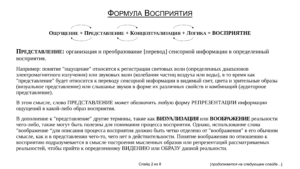 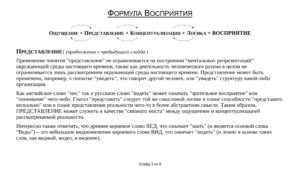 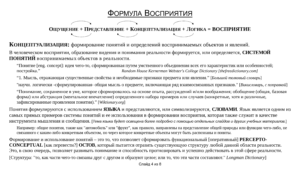 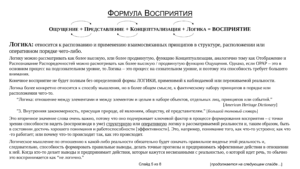 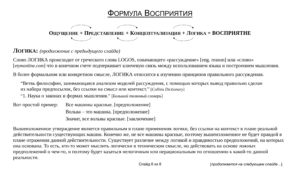 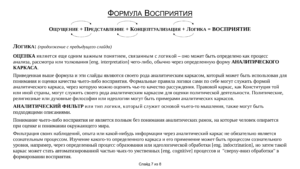 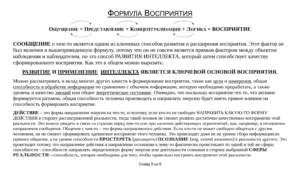 The Formula Of Perception

The general conceptual categorization of Sensation would also include Pattern Mapping and Recognition (PAMAR), or it could be represented as its own stage with a more narrow concept of Sensation.

Picturization: organization and translation of sensory information into perceptual forms.

In this sense, the word PICTURE is not limited to just visual representation but is expanded to mean any form of
PERCEPTUAL REPRESENTATION of sensory information.

In addition to “picturization,” other terms like VISUALIZATION or IMAGINATION of the reality of something can also be useful in understanding the process of perception. However, using the word “imagination” to describe a process of perception should be clearly differentiated from “imagination” in its common sense as in picturing something that is not there. The concept of imagination in relationship to perception is meant in a sense of constructing mental images or representations of realities in question to arrive at a certain VISION or IMAGE of a given reality.

Picturization: (continued from the previous slide)

The concept of picturization is not limited to constructing “mental representations” of the immediate environment just as the operation of the human mind as a whole is not limited to just addressing the immediate environment. Picturization may be applied, for example, to trying to “see” what another person may be saying, or to “see” the structure of some organization.

English word “see” can mean a “visual perception” or “understanding” of something. The verb “picture” follows the same sense logic in terms of an ability “to imagine visually” or to be able to envision the reality of something in a more abstract sense. In this way, Picturization can serve as a “bridge” between sensation and conceptualization of the realities in question.

Conceptualization: formation of concepts of perceived objects and phenomena.

In human perception, the resulting vision and understanding of reality is shaped, or defined, with a SYSTEM OF CONCEPTS of perceived elements in reality.

“Concept: an idea of something formed by mentally combining all its characteristics or particulars; a construct.”
Random House Kernerman Webster’s College Dictionary [thefreedictionary.com]

“An understanding retained in the mind, from experience, reasoning and/or imagination; a generalization (generic, basic form), or abstraction (mental impression), of a particular set of instances or occurrences (specific, though different, recorded manifestations of the concept).” [Wiktionary.org]

Concepts are formulated with the use of LANGUAGE and represented, or symbolized, with WORDS. Language is one of the most direct examples of a system of concepts and their use in shaping perception as well as serving as a tool for thinking and communication. [The subject of language will be covered in much more detail with separate slides and other educational material.]

For example: general concepts such as a “car” or a “fruit” usually aim to represent a general nature or function of something not tied to any specific instance but through which specific instances can be identified and understood.

[Structure: “the way in which the parts of something are connected with each other and form a whole, or the thing that these parts make up.” Longman Dictionary]

Logic: refers to realizing and utilizing interconnected principles in the structure, arrangement or operating order of something.

Logic can be seen as a higher, or more advanced, function of Conceptualization very much like pattern mapping and recognition could be seen as a higher / more advanced function of Sensation. However, as PAMAR is mostly a subconscious level process(ing), Logic is very much a conscious level process(ing) and so is something that requires greater consideration.

The resulting perception is not complete without some form of LOGIC applied to the observed or experienced reality.

Logic more specifically refers to a way of thinking or reasoning, but in a more general sense, to an actual set of principles in the order or arrangement of something.

“Logic: the relationship between elements and between an element and the whole in a set of objects, individuals, principles, or events.” [American Heritage Dictionary]

This second meaning of the word is very important because it highlights a key factor in the process of forming perception in terms of being able to see (by reproducing in the mind) the structural or operating logic within the reality in question and so be able to achieve good understanding and workability. This, for example, would be understanding how something is constructed, how something works or why something occurs the way it does.

Logical thinking in relationship to some reality would necessarily mean a correct view of that reality and so an ability to form the right conclusions, make accurate predictions and take effective actions with respect to it. When someone draws conclusions and takes actions that seem disconnected from the reality in question, then it is common to see it as “not logical.”

The word LOGIC is derived from the Greek word LOGOS meaning “reason” or “word” [etymonline.com] which ultimately highlights a key connection between the use of language and thinking.

In a more formal or specific sense, LOGIC refers to an actual study of the principles of correct reasoning.

“The branch of philosophy concerned with analyzing the patterns of reasoning by which a conclusion is properly drawn from a set of premises, without reference to meaning or context.” [Collins Dictionary]

Here is a simple example: All tomatoes are red. [premise]

Therefore, all heirlooms are red. [conclusion]

The above proposition is correct in a sense of applied logic without reference to context in terms of actual reality on the nature of tomatoes. Obviously, not all tomatoes are red so the above would not be factually true. There is a differentiation between logic and the truthfulness of premises on which someone’s logic is based. Someone could think logically in a technical sense but operate on false premises, or false assumptions about something, and so appear to be illogical or irrational with respect to some reality in question.

EVALUATION is another important concept related to logic and could be understood as the process of analyzing, viewing or interpreting something usually through some form of ANALYTICAL FRAMEWORK.

ANALYTICAL FILTER or a type of logic that someone relies upon could be other ways to describe this.

Filtering one’s observations, experiences or some information through an analytical framework is not necessarily a conscious level process. Learning some given framework and its application can be a conscious level process such as through some process of education or indoctrination, but then such framework can become an automated part of someone’s cognitive processes and a top-down processing in the formation of perception.

COMMUNICATION ABOUT something is one of the key ways to develop and enhance perception. It was not included in the above formula because it is not necessarily a direct factor between an object of observation and the observer, but it is a way to DEVELOP INTELLIGENCE which then contributes to the quality of constructed perception.
As it can be generally stated:

The Development and Application of INTELLIGENCE is the Key Basis of Perception.

Numerous other qualities can be considered in their contribution toward the formation of perception, such as one’s goals and intentions, the general capacity for information processing when compared to the volume of information that needs to be addressed, as well as the level and quality of one’s emotion, or an overall energy state. Obviously, since perception is something that is actively constructed by the mind, one’s general ability to produce and direct energy would have a direct impact on the ability to form perception.

ACTION is a form of directed energy toward something, and so if someone is not free to DIRECT SOME FORM OF ACTION toward the reality in question, then they would not be able to perceive it very well. This can be seen in relationship to fear of something or some active restrictions such as with respect to directing communication. Communication to someone is a form of directed action. If someone is not free to communicate to some other person, they will not be able to form adequate perception of that person. This is not even on a level of gathering information from direct communication, but on a level of being able to EXTEND AWARENESS toward the reality of another. This is because direction of action and direction of awareness toward something virtually stem from the same sphere of ability—of being able to direct some form of energy or activity of consciousness toward a selected SPHERE OF REALITY—which is required in order to properly construct perception of that reality.