The purpose of this page is to provide a very basic coverage of chemistry in order to develop an enhanced ability to PERCEIVE and INFLUENCE one’s own BIOCHEMICAL PROCESSES in association with NEURO-PHYSIOLOGICAL FUNCTIONS AND STRUCTURES*, especially in relationship to better understanding and being able to handle debilitating effects of over-exposure to harmful VOC’s, such as formaldehyde.
*In general, biological, physiological and neurological structures, functions, processes and activities.

Better understanding of chemical elements, their properties and the principles of their combinations (chemical binding) opens the door to better awareness, understanding and an ability to handle (even with one’s consciousness alone) the symptoms and biological changes one may experience during and after exposure to harmful VOC’s.

The term VOC’s – volatile organic compounds – is commonly used to refer to carbon-based gasses in relationship to air pollution.

Particular attention, within the framework of this project, is focused on key atoms of biochemical structure and processes such as CARBON, HYDROGEN, and OXYGEN.

ATOMIC NUMBER (top left) for each element indicates a number of PROTONS in an atom.

Each ROW represents a PERIOD and indicates the number of ELECTRON SHELLS for a given element. An electron shell can be said to have “placeholders” to contain a specific and limited number of electrons. As explained below in a more detailed description, electron shells are designed to contain multiples of two of electrons (electron pairs). Having empty spots in a shell enhances element’s CHEMICAL REACTIVITY and BINDING function since electrons from other elements can “pop” into an empty “placeholder” in the shell and so form a chemical bond, such as an ionic bond or a covalent bond – see:
https://www.britannica.com/science/atom/Atomic-bonds
https://en.wikipedia.org/wiki/Covalent_bond
Covalent vs. Ionic bonds: https://youtu.be/VSc491HLzDo

Each COLUMN represents a GROUP and indicates the number of ELECTRONS in the outer shell.

“The outermost shell of electrons—called the valence shell—determines the chemical behaviour of an atom, and the number of electrons in this shell depends on how many are left over after all the interior shells are filled.” [link]

“Those outer electrons are also called valence electrons. They are the electrons involved in chemical bonds with other elements.” [link]

HYDROGEN has one shell and one electron which means it has an extra unfilled placeholder. The simplicity of its construct and an extra placeholder make hydrogen readily reactive and easily bound to other atoms and molecules. It easily forms stable covalent bonds. Helium, on the other hand, has one shell and two electrons which gives it a “stable” construct on its own and a lack of reactivity.

OXYGEN, out of a total of 8 spots in its outer shell, has 6 valence electrons and 2 available “placeholders” and so it forms a very stable and harmonic connection with two hydrogen atoms to produce a water molecule: H2O. 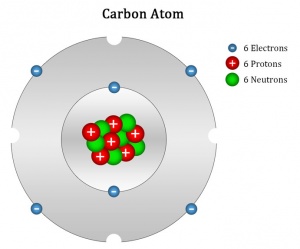 CARBON serves as the basis for forming organic compounds. Its relatively light and symmetric construct with 4 valence electrons and four available placeholders make it easy for carbon to form covalent bonds with other elements which allows for the formation of complex molecules and polymers (monomer molecules linked together in chains).

What Are Atoms Made Of?
https://www.youtube.com/watch?v=ooWfzpUIoNM

Another good basic explanation of an atom:

How Small Is An Atom? Spoiler: Very Small.
https://www.youtube.com/watch?v=_lNF3_30lUE

Empty Space is NOT Empty
https://www.youtube.com/watch?v=J3xLuZNKhlY

“In chemistry and atomic physics, an electron shell, or a principal energy level, may be thought of as an orbit followed by electrons around an atom’s nucleus. The closest shell to the nucleus is called the “1 shell” (also called “K shell”), followed by the “2 shell” (or “L shell”), then the “3 shell” (or “M shell”), and so on farther and farther from the nucleus. The shells correspond with the principal quantum numbers (n = 1, 2, 3, 4 …) or are labeled alphabetically with letters used in the X-ray notation (K, L, M, …).

The electrons in the outermost occupied shell (or shells) determine the chemical properties of the atom; it is called the valence shell.

An electron shell is the set of allowed states that share the same principal quantum number, n (the number before the letter in the orbital label), that electrons may occupy. An atom’s nth electron shell can accommodate 2n2 electrons, e.g. the first shell can accommodate 2 electrons, the second shell 8 electrons, the third shell 18 electrons and so on. The factor of two arises because the allowed states are doubled due to electron spin—each atomic orbital admits up to two otherwise identical electrons with opposite spin, one with a spin +1/2 (usually denoted by an up-arrow) and one with a spin −1/2 (with a down-arrow).

Useful website with an explanation and a clear depiction of s, d, p and f subshells: Electronic Orbitals

Notice the menu to the left on these two websites:

Nice app (you can select n and l values as well as xyz axis configurations to see orbital models in 3 dimensions):

This has examples of 3-dimensional models of atoms:

“The Hybridization Theory provides a description of the process involving the combination of atomic orbitals to create new bonding orbitals.” [link]

A student’s ability to take 2 dimensional molecule off the black board during lecture and fold it into 3 dimensions, or envision a molecule in three dimensions from a page in a book, is arguably one of the most essential skills when learning chemistry.

A chemistry student who has the ability to VISUALIZE MOLECULES IN THREE DIMENSIONS is rewarded with a better understanding of chemical properties, physical properties and most importantly the ability to PREDICT chemical reactivity. Understanding how atoms within molecules are oriented in three dimensions requires an understanding of Hybridization Theory. … If Chemistry is considered the central science, then Hybridization Theory may be considered the cornerstone of chemistry.