THE FORMULA OF PERCEPTION

In order to develop FULL PERCEPTION of something – perception as a form of reflection of the actuality of some given reality in one’s consciousness – there must be an ability to somehow SENSE the reality in question, then to PICTURE exactly what one is sensing, to DEFINE it in more abstract terms [CONCEPTUALIZATION] and then develop an UNDERSTANDING [LOGIC] of its construction and/or the underlying principles behind its operation or functioning. The slides below attempt to provide a more detailed description of the key abilities in the process of perception formation. 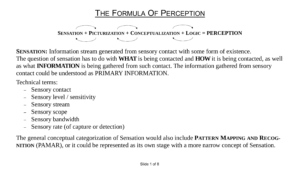 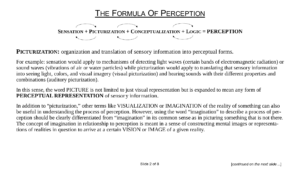 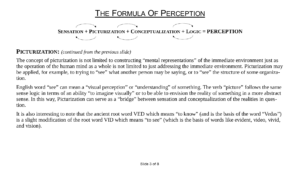 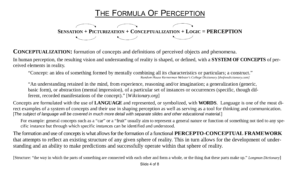 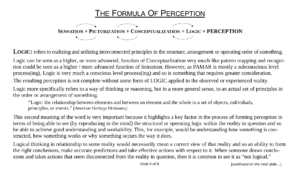 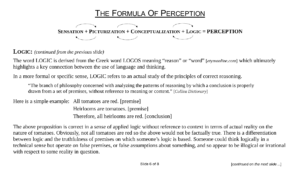 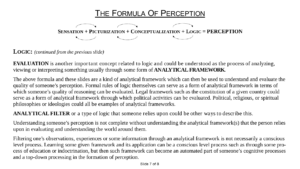 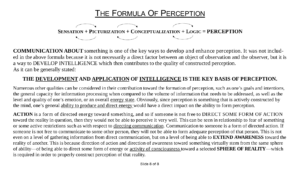 February 11, 2021: ABSTRACTION needs to be added as a step in the process of PICTURIZATION. Some form of initial abstraction is necessary to group and encompass a given stream of sensory information within one general idea of something to be pictured. The term ABSTRACTION could be used to differentiate between lower level “concepting” in order to form a basic idea or impression of something to be pictured and the higher level CONCEPTUALIZATION that is related to language and then logic.

March 16, 2020: I have updated the formula to include an important and all encompassing factor of KNOWLEDGE as something that underlies and applies to every other capability, but I’m yet to rework the slides. The updated formula:

March 21, 2020: Now that I’m thinking about it, I think conceptualization could come before picturization – ability to form a CONCEPT of something would have to precede picturization, because without a way to DEFINE something, to place it into a concept, how would you know WHAT you are creating a picture of? If you have no name, no IDEA of the thing, how would you get an idea to picturize it in order to better understand what it is? So forming a CONCEPTION of something, must come before one can form a MORE DETAILED VIEW.

… But at the same time, how would you really conceptualize something if you couldn’t form some kind of picture (view) of it beforehand? WHAT are you going to assign a concept to, if you don’t have any picture first – some form of mental vision of the thing that you are conceptualizing? So perhaps the formula should stay as is, with the CIRCULAR RELATIONSHIP arrows just as I have in the slides. The question: did humans learn to PICTURE things first, before they learned to assign concepts to them – did representative art develop before language? Being able to represent – to duplicate the reality of something in one’s space of consciousness…

Maybe instead of “Knowledge,” it should be UNDERSTANDING as “knowledge” seems too general of a word. The better you can understand the way something is, the better you can picture its reality.

Also, instead of using the equal sign ‘=’ I could pick a different sign such as the one used in Linux command line for passing arguments – for indicating that something goes inside of something else. Such as like so: PERCEPTION < Sensation + Picturization + Conceptualization + Logic. In this case, the sign ‘<‘ does not mean “less then” – it means that all these factors on the right GO INTO the function on the left. In this case, perhaps the order should be as follows to indicate the order of processing (you would basically have to read it from right to left): PERCEPTION < Logic + Conceptualization + Picturization + Sensation.

Or how about something like this (to surround it with symbols to communicate combination and inclusion):
< Sensation + Picturization + Conceptualization + Logic > PERCEPTION

Or, if we add the factor of REALITY as a source of some information. After all, sensation is applied to something. Reality is a source of information or some signals (such as light or sound waves) that are being contacted through sensation.

After all, PERCEPTION is the process of constructing a logical view of some given reality, as well as the resulting view itself – the definition of perception.

March 22, 2020: The word Knowledge is a general world that describes existing information, the information that exists such as books, etc that represent recorded knowledge, but are not necessarily the knowledge that is a part of someone’s consciousness. So just indicating “Knowledge” in the formula isn’t exactly fitting (or isn’t exactly appropriate) because the general concept of knowledge includes the knowledge that may be outside of someone’s mind. The world KNOWING or KNOWINGNESS would be more appropriate to describe the KNOWLEDGE ONE CONTAINS. Or it could simply be a phrase CONTAINED KNOWLEDGE, or better yet APPLIED KNOWLEDGE.