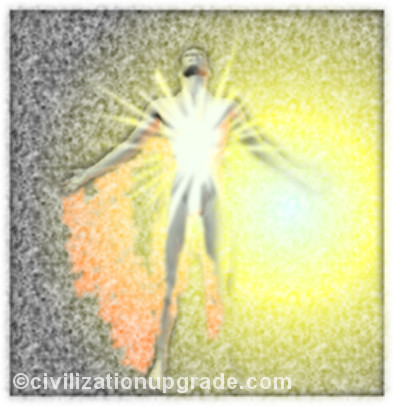 Perhaps in its most basic sense, CONSCIOUSNESS could be understood as:

A FORM OF SELF-DIRECTED INTELLIGENCE CAPABLE OF AWARENESS, PERCEPTION AND CREATION OF REALITY.

[A painted picture would be an example of a created reality which could in turn be perceived in its own way (for example, there can be different concepts about art and how it is seen). A life form such as a plant or an animal or some form of human civilization would be other examples of created realities.]

One’s consciousness expands to the degree one can confront and handle reality – any reality; and one’s ability to confront and handle reality expands to the degree of one’s advancement in the condition of consciousness. It’s a feedback loop. Expansion in consciousness, apart from creation of some reality, has most directly to do with growth in intelligence, awareness, and the development of perceptability – the increase in capacity for knowing and awareness. This in itself depends on the ability to produce and direct energy.

Consciousness can be separated into a number of forms or types – different ways in which someone can experience (and perceive) themselves and reality at large.

IDENTITY-CONSCIOUSNESS: perceiving oneself as a somewhat fixed identity in the world of other (separate) identities. Here is a rigid identification with some criteria such as one’s gender, race, religious affiliation, position at work, social status, group membership or anything else of this nature. A view of oneself through a set of fixed ideas or beliefs could be said to comprise an “ego” (see page Transcendence of Ego for additional information). This state can also be referred to as a form or object consciousness – perceive self as an object form in the realm of other object forms.

Since any form is only a temporary manifestation and subject to dissolution or destruction, the two common emotions at this state of consciousness are fear (of loss of one’s identity) and hostility (against anything that may threaten the ego construct). Judgement of others through identity labels (stereotyping) and a sense of being separate from others and the rest of existence are other common manifestations at this state.

This state could also be referred to as a “fixed construct” and is basically a level of viewing or interpreting reality through a system of relatively fixed or rigid perception constructs.

FREE FORM EXPRESSION: here one lives in the realm of action, expression, and having experiences. The perception of oneself is being more of creative energy or action rather than a fixed identity – a state that is commonly found in children before their expression goes through years of conditioned restrictions and structuring into a “societal mold” whose consciousness gets thoroughly boxed up in a web of rigid identity labels. In free form expression one’s beingness is still more or less limited to be within one’s body where one’s expression and interaction with the environment is accomplished through actions of the body (to include emotions, speech… etc).

ENERGY-CONSCIOUSNESS: perceiving oneself as an expanding field of “aware energy” through one’s body and some aspects of the environment, perceiving them as “energy constructs” of different densities and configurations. It is basically a realization of self as being a manifestation of energy that creates forms, and so there may be a sense of “unity” with everything and an emerging ability to expand through the environment as through one’s own body. Shifting into this state is commonly associated with an experience of “enlightenment” where someone realizes one’s “true nature” as being that of “light” or some sort of live energy-consciousness that has no true bounds.

At this state one begins to gain a sense of immortality, not in physical form but in terms of one’s identity as as “energy being” that can manifest in forms. One no longer identifies as being a “human being” and a human identity with one life and shifts in activity to improving the condition of overall reality in order to improve opportunity for higher, more advanced forms of creation and experience.

Telepathic communication across different form of existence opens up at this state as one now perceives different forms (plants, animals, Earth, Sun, stars, Space, and so on) as various manifestations of “self” as a form of energy of creation in action. Reality is seen as being full of “intelligence” that can be perceived and interacted with. Space is not “empty;” it only appears empty when someone cannot perceive energies pervading through it.

SPACE-CONSCIOUSNESS: perceiving oneself to be “aware space” (pervading emptiness) with all of reality inside of it unfolding as a real-time motion picture. The extent of this space of awareness can vary from an immediate scene out to encompass the whole world or extend out into the Universe. This can also be referred to as Realm State meaning that at this state someone can perceive the entire “realm” as a sort of “reality construct” within oneself as space-consciousness as opposed to being a form of manifestation within that construct (including in the form of energy).

Here, one is in a state of being motionless space while perceiving motion and existences to be within oneself including that which one can control in terms of one’s own body. Being space-awareness is different from energy-awareness in a way that in the energy state of consciousness one perceives to be a sort of “substance” of live, aware energy that pervades through the surrounding existence, whereas in space-state one is aware “space” with existences within it. They are similar but nevertheless somewhat different forms of experiencing reality.

The states can be understood and “virtually” experienced within a dream world. In a “regular” dream, one is simply a participant, sort of reacting within a dream scenario with a fixed view of oneself as a character in a dream – identity-consciousness. There is then a point when someone can become aware that they are in a dream and gain the freedom to do whatever they want within a given dream scenario – free form expression. [In actual dream practices, this would be an entry point into the practice of Lucid Dreaming.] With progressive advancement of one’s awareness and ability, an individual within a dream can start to recognize that they are not limited to the dream construct itself and attempt to gain greater freedom and influence such as levitating, engaging in telekinesis (moving objects by feeling through them), and manifesting or transforming different aspects of the dream reality – energy-consciousness. At this state one beings to feel that they are not just a character in a dream, but the dream itself. Space-consciousness is not so much a factor in the dream world since that “dimension” is much more malleable and responsive to individual’s intentions; hence, the transition into greater states can be quite rapid.

In the identity-consciousness state one simply exists on a level of being a single form, whereas in a state of aware energy one is shifting into that which can create forms and identities with its various expressions – first through increasing ability of expression of one’s initial form such as that of a human being (free form expression) and beyond through transcendence of one’s form entirely and expansion of one’s beingness (as a form of energy) through the environment (not unlike an energy wave, hence, the name “energy-consciousness”). Space-consciousness is then the next stage when one no longer perceives oneself as a form of existence (including a form of energy) but as aware space that can contain existence(s).

These states are not mutually exclusive. They are presented in the order of expanding perception and processing capacity. Someone who was able to shift into space-consciousness, for example, would be able to perceive and experience all the other reality constructs in terms of forms and energies. Someone in a state of energy-consciousness could perceive forms as potential constructs of reality that will seem more fixed or “rigid” in nature.

It could be said that one’s state of consciousness expands in direct ratio to one’s capacity to embrace* a given set of existing realities.

*Embrace is used in the following senses: 5) to take in with the eye or the mind; 6) to encircle; surround; enclose. 7) to include or contain. [Dictionary.com]

KNOWING means the ability to reflect or represent the reality of something in one’s space of consciousness. When it comes to the concept of KNOWING, differentiation should be made between REPRESENTATIVE KNOWLEDGE and DIRECT KNOWLEDGE (or direct awareness). Representative knowledge is something one gains in school, for example – reading books and listening to lectures about something – acquiring knowledge based on REPRESENTATIONS about the reality of something rather than contact with the actual reality. Then, someone has “knowledge” that is based on memorization of “facts” from books and lectures rather than direct contact with the realities in question. While memorization of “facts” based on representations is a form of “knowledge,” the concept of “knowing” in the above definition for consciousness has more to do with the ability to reflect and know the ACTUAL REALITY of something as opposed to thinking with memorized “facts.”

In its most basic sense, perception refers to the way something is seen or experienced.

Perception can be broken down into three general types in line with the three basic states of consciousness:

Regular perception through the sense channels is essentially a detection and interpretation mechanism, and it should be noted that: