As time went on Hubbard increasingly transformed Scientology into an elaborate system of exploitation and mind control where spirituality or pretense at religiosity was only used as a bait to lure unsuspecting souls into unconditional servitude. Let’s look at a good example of this.

In late 1960’s Ron Hubbard came up with what he called CONDITIONS which were progressive conditions of beingness or operation through which an individual or an organization or any activity could be structured and evaluated. The “normal” conditions start at Non-Existence progressing through Danger, Emergency, Normal, Affluence, and peaking at Power and are more or less common sense guidance to what could or should be done in a given situation to improve performance. These “normal” conditions are concerned mainly with ACTIONS one should take and are in themselves a form of programming of someone’s activity for a given situation.

Outside of “normal” conditions, Hubbard also devised what he called Lower Conditions which have more to do with someone’s beingness or a determination of a person’s status in a group. These conditions in descending order are: Liability, Doubt, Enemy, Treason, and Confusion. Let’s take a look at the last three:

When a person is an avowed and knowing enemy of an individual, a group, project or organization, a Condition of Enemy exists.

The formula for the Condition of Enemy is just one step:

1. FIND OUT WHO YOU REALLY ARE.

The formula for the Condition of Treason is:

The formula of the Condition is:

It will be seen that the progress upward would be in Confusion, find out where you are, in Treason, find out that you are; and for Enemy, find out who you are.

Notice how it says FIND OUT as opposed to DECIDE. It can make some sense for the Confusion formula, but for the other two… How about DECIDE WHO YOU WANT TO BE instead of “find out?” Find out how and from who? The definition of who you REALLY are is already provided in Scientology’s own primary axiom:

1. LIFE IS BASICALLY A STATIC.

Definition: a Life Static has no mass, no motion, no wavelength, no location in space or in time. It has the ability to postulate and to perceive.

So basically you are a unit of consciousness with an ability to create an identity for yourself. There is no FINDING OUT who you are unless you want something or someone else to determine an identity for you as opposed to you creating it. That’s as far as Treason and Enemy are concerned.

Confusion also comes with a catch. In order to find out where you are, according to the formula of this condition, you just look around your present environment which is formally called a LOCATIONAL and is usually delivered by another person walking you around and asking you to look at various things (as if you were incapable to do so on your own). It may be a useful procedure for someone who became disoriented as in the case of a natural disaster or some shock or lost orientation due to drugs or alcohol, but practiced regularly “just because” Locational is nothing more than a form of conditioning – conditioning an individual to be oriented in space by someone else which in itself brings about a greater degree of compliance.

In terms of Scientology’s basic axioms, “finding out” where you “are” by looking at the surrounding environment comes along with an embedded consideration that you are pinned to your body and its physical location. There is really no reason why you, as a boundless unit of consciousness, cannot expand yourself to be in other places, but of course for Scientology’s aims you need to be “here” so you could be further programmed and manipulated by Scientology authorities.

So these lower conditions basically seek to establish YOU as an IDENTITY by first locating you in space (the first step to establishing an identity) and then defining that identity for you in more specific terms so you can be further programmed through the rest of the conditions and other methods employed in Scientology’s system of mind control.

Many Scientologists would be able to recall someone at the Church asking them something like: “Are you a Scientologist? You need to decide if you are a Scientologist or not…” and it’s not like you can say “No” if you want to continue with Scientology. This is in effect trying to entrap someone into an identity through which that person could then be further manipulated. This question is commonly asked by recruiters to then manipulate the subject into joining staff or the Sea Organization.

The same principle is applied for manipulating people in other areas of society. “Are you a true Christian?” “Are you a real man?” “Are you my friend or not?” “I thought you were a good person…” – there are many uses of this method of manipulating people by encapsulating and pressuring them through certain identities whether people who employ such a mechanism realize exactly what they are doing or not.

Have you ever met someone that tries to tell you how great and generous and kind you are just to squeeze some favor out of you… and if you decline, they quickly turn around to start telling you how terrible you are? This is exactly how this works in Scientology – if you keep going along with the program then you are able, ethical, an OT, among the elite, a big being, a homo novice or whatever other “noble” identity that can be bestowed on you, but should you start expressing doubts and disagreements, leave or worse – start criticizing the Church – then there is a whole slew of identity labels waiting for you on “the other side”: a degraded being, a squirrel (someone who introduces changes to Hubbard’s methodology), a criminal, a 1.1 (covertly malicious), a suppressive person (SP), a PTS (potential trouble source – someone connected to an SP), a psychotic, down tone, a baby boomer (a term for females who decide to have children instead of serving in the Sea Org), so on and so fourth.

In fact, with the advance of various fund raising schemes under David Miscavige, Scientology has been preoccupied with virtually nothing else but selling identities to its parishioners in the form of STATUSES for its multiple donation schemes. Let’s take a look at just one – the main fund-raising scheme for International Association of Scientologists: 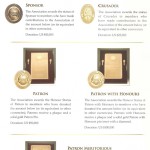 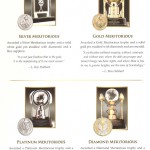 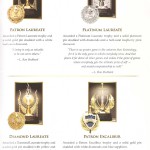 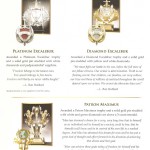 The Underground Bunker reported amounts for some of the higher statuses to be the following:

Welcome to the Religion of Scientology!

An earlier predecessor to Scientology ethics conditions is Hubbard’s formulation of the “conditions of existence.”

(1956) The Fundamentals of Thought: The Conditions of Existence

They are BE, DO and HAVE.

THE SECOND CONDITION OF EXISTENCE IS DOING. By doing we mean action, function, accomplishment, the attainment of goals, the fulfilling of purpose, or any change of position in space.

THE THIRD CONDITION IS HAVINGNESS. By havingness we mean owning, possessing, being capable of commanding, positioning, taking charge of objects, energies or spaces.

The essential definition of having is to be able to touch or permeate or to direct the disposition of.

The game of life demands that one assume a beingness in order to accomplish a doingness in the direction of havingness.

These three conditions are given in an order of seniority (importance) where life is concerned. The ability to be is more important than the ability to do. The ability to do is more important than the ability to have. In most people all three conditions are sufficiently confused (chaotic, baffling) that they are best understood in reverse order. When one has clarified (brought order into) the idea of possession or havingness, one can then proceed to clarify doingness for general activity, and when this is done one understands beingness or identity.

It is an essential to a successful existence that each of these three conditions be clarified and understood. The ability to assume or to grant (give, allow) beingness is probably the highest of human virtues. It is even more important to be able to permit (allow) other people to have beingness than to be able oneself to assume it.

This is yet another good example of “thought entrapment” technique where Hubbard tells someone how to think about something which is actually against common sense and then preemptively invalidates disagreement with a phrase:

“In most people all three conditions are sufficiently confused…”

What could actually be common sense thinking easily derived from observations is relabeled as “confusion” in Hubbard’s construct. Identity could actually be seen as probably the least important of the three and is often a product of what one does and/or what one has. As the word itself suggests, it is what others and the individual him or herself use to identify oneself with. A football player is someone who plays football and a good football player is someone who also has a good track record. How can someone be considered a “football player” without actually playing football? How can someone be considered a “driver” without having and driving a car? How can someone be considered a “painter” without having painted and produced some paintings to look at?

Identity can be rather arbitrary label used to IDENTIFY someone which is usually connected to what someone does and/or what someone has. It is often outside of direct control of an individual or group or company to which it is applied by others. If someone DOES good work and HAS good results, that person could then be identified as a “good worker,” a “good spouse,” a “good businessman” or whatever the case. Someone can “assume” whatever they want about themselves, but if their actions speak otherwise they are going to be identified differently in public’s eye. In fact, there are whole companies out there specializing exclusively on creating and maintaining someone’s good PUBLIC IMAGE – i.e. how the public IDENTIFY the company or individual in question.

At any rate, this example of Hubbard’s “reverse logic” from what is usually common sense is yet another reason why Scientologists often get so preoccupied with fighting over identity labels as opposed to focusing on actions and results that others can easily see, outside of Scientology’s efforts to beef up and in some way enforce a positive image (i.e. perceived identity) through marketing on one side and organized suppression of any criticism on the other.

It is also worth noting that the word “virtues” is usually connected to someone’s good deeds stemming from good moral character or moral convictions, yet Hubbard again emphasizes what essentially could be construed as ego empowerment as “the highest of human virtues.”

“The ability to assume or to grant (give, allow) beingness is probably the highest of human virtues.”

What does “granting beingness” even mean in the context of beingness defined as an “identity?” If we take beingness to mean some form of manifested existence then granting beingness would actually mean giving someone SPACE, some “breathing room” for existence and expression so to speak. This would be granting beingness, and we can see that someone would in turn have more space for oneself when he or she is able to grant it to others.